This section is aimed at engineers and operations managers in the chemical and petrochemical industries. Each day, these professionals perform unit operations in chemical engineering, including distillation ‒ a specialty of Speichim Processing. While it is difficult to impart field experience, some technical information can be shared on various topics, such as physicochemical properties, liquid storage and transfer, heat transfer, separation operations (including distillation), process control and command and any engineering techniques useful to operators. Therefore, Speichim Processing will regularly update its website with downloadable files to facilitate the daily work of operators and to share some of its expertise.

A shortcut simulator is also available in this section. This is a basic approach that makes it possible to determine the rough proportions of a column to distill a binary mixture. Enter the composition, flow rate and thermal conditions of the feed (the feed may be liquid at its bubble point up to the gas phase at its dew point), the mole fractions of the heavy key in the distillate and the light key in the bottom of the column, then the simulator will give you the liquid and gaseous movements above (rectification) and below (stripping) the feed, as well as the number of equilibrium stages in each section and the reflux ratio.

With the characteristics of the trays or structured packing you want, you can then obtain the approximate height and diameter of your equipment.

The shortcut simulation provides a good result with a miscible mixture whose characteristics are close to an ideal mixture, with a relative volatility that does not vary must across the entire concentration range.

As is the case with the monochlorobenzene-ethylbenzene mixture. The liquid-vapor equilibrium curve nearly matches a constant relative volatility curve equal to 1.13. 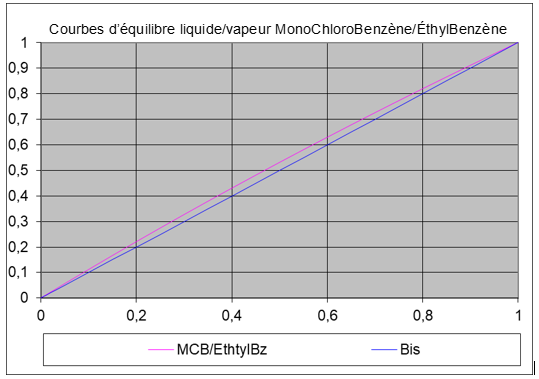 Results
– The shortcut simulation and a more advanced simulation produce similar results (less than 10% deviation) with an R/D of 25.

With a miscible mixture whose characteristics are far from those of an ideal mixture, the result will be false (or even fancifull in the case of an azeotrope), as relative volatility varies significantly across the concentration range.
That is the case for the non-azeotropic acetone-water mixture. The liquid-vapor equilibrium curve is very different from a constant relative volatility curve.
For relative volatility, by taking the geometric mean of the top and bottom values or the geometric mean of the top and bottom values and the feed (the two most frequently used methods), the result remains far from the actual liquid-vapor equilibrium curve.
Relative volatility is higher over the first part of the curve and lower over the second part, even ending with compression, which suggests separation is difficult at these concentrations (relative volatility near 1). 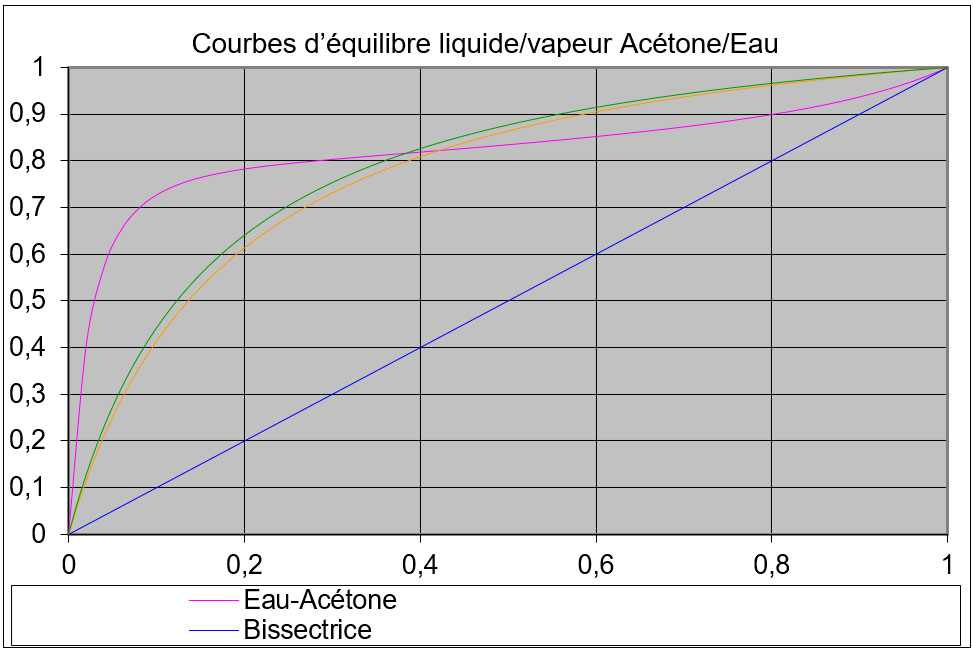 Conclusion :Caution should be exercised when using this relatively simple method. It should only be applied to mixtures whose volatility does not vary much with concentration. Otherwise, more sophisticated thermodynamic models should be used, such as those offered by ProSim.